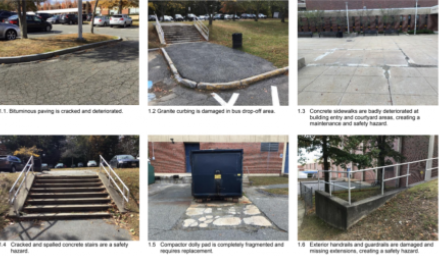 Images of the school ground’s issues.

The grounds at Triton suffer from many problems. However, a potential renovation project has been started back in 2019 that has the chance to fix those issues, albeit at a rather large cost.

Triton’s grounds have many issues, some that can put the safety of students at risk, and some that just make the school look less appealing from an aesthetic point of view. Despite the facilities and roof issues being more prevalent, problems with the grounds still degrade the overall quality of Triton as a high school. 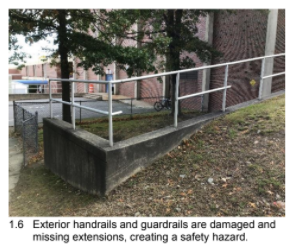 Above are examples from a report, of issues that need to be fixed

“It would be nice to get the sidewalks and asphalt repaved,” said Dr. Adam Lothrop, a science teacher at Triton, “and get some of the fixtures replaced.”

The proposed renovation project is very similar to the recent Pine Grove Elementary School changes. The project mainly tackles replacing parts of the school that have major flaws, an example being the roof which has to be completely replaced. Although it should be noted that there won’t be a whole new school building like the building project to construct a new Pentucket High school. The project’s cost back when it was first started was about $50 million, however due to prices of materials changing, and the Covid-19 pandemic, the cost has now gone up to over $61 million. Although the current cost is known, how long until the money is collected is not. This means that nobody is sure when the actual changes will be applied, which means it is possible that school could be interrupted when the repairs start.

“It definitely has to have work done.” said Nick Hubard-Bruchard, a Triton student, after being asked about his opinions on the grounds.

Hubbard-Bruchard went on to describe how Triton was aesthetically rather ugly from an outside view. All of the issues might not seem to stand out that much, but after really looking at pictures and thinking about it, people start to realize just how the issues stack up and make the school’s quality worse.

“We have made repairs, and they’re still ongoing on some of the concrete for safety reasons.” said Mr. Christopher Walsh, manager of the grounds and facilities at Triton.

Despite all of the uncertainty on when the project itself will happen, if there are any major safety concerns, immediate action may need to be taken to make repairs if possible. So even though the school grounds are not aesthetically pleasing, safety concerns will lead to work being as soon as possible.

Although the grounds at Triton aren’t in great shape, actions are being taken to improve the safety and aesthetic issues so that students can look at their school and feel safe and welcome.