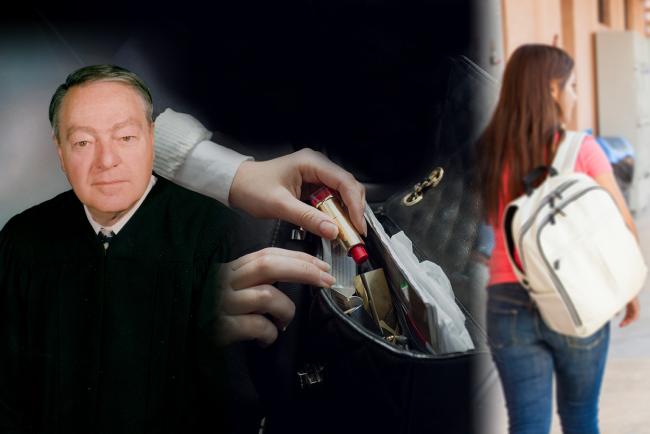 Supreme Court case on the ability of public schools to conduct searches of students's belongings without a warrant.

Under a Supreme Court ruling, it is legal for students to have their personal items searched in school if there is justifiable cause, or even just a suspicion.

In 1985, a case was brought to the Supreme Court regarding the privacy rights at school. T.L.O., a 14-year-old freshman at Piscataway High School, was found in the bathroom smoking a cigarette. She was then questioned and searched by the principal. Upon search, the school found a pack of cigarettes and marijuana paraphernalia. She was immediately charged with possession of illegal drugs and  sentenced to a one year probation.

Many may argue that T.L.O.’s rights were dismissed and her fourth amendment right was violated. However, in this case it is not so. It was deemed reasonable to search students if there is reasonable suspicion, which is just the suspicion by a superior that there is illegal activity or objects in your possession, by the Supreme Court. Also, the fact that T.L.O. was caught while in the action of smoking was more than enough reason to punish and search. Although the school has to follow and respect its students 4th amendment rights it also has to counter balance it with maintaining the safe environment in the school.

In a similar case of Vernonia School District v. Acton, 1995, the school district had implemented randomized drug testing of athletes due to a known drug problem within the school. When called upon, a 7th grader named James Acton refuse to take the test, and his parents refused to consent to the testing as well. As a result Acton was unable to participate in football. The Acton family then sued the school district for violating their fourth amendment right. This case was taken to the Supreme Court where they decided that the drug testing policy was reasonable and was ruled under the same reason as T.L.O., that the school must be able to maintain a safe environment.

According to a study lead by HHS.gov, it is estimated that 3.6 million middle and high school students were current tobacco users in 2017. However, despite these numbers, the use of tobacco of that age group had declined greatly over the past 40 years. These numbers are still shockingly high, and the use of tobacco of students in schools is still shockingly steep. There is going to be a continuance of the use of tobacco by the students, and students will still complain about their lack of privacy, but there is a right by the school to maintain a clean and safe environment. That includes searching, seizing, and punishing students who abuse the school.

I agree with the Supreme Court’s ruling that they can search a students bags on the grounds that there is reasonable suspicion. If a student poses a threat to the campus then I believe the school should be allowed to take action and search the student. Everyday, there are students that could be threatened by the acts of others who believe that as long as they keep their items in their bag, or on their person, they are able to bring anything they please into the school, despite the danger. This poses a threat to those that come to school and are being put in a bad position by others.