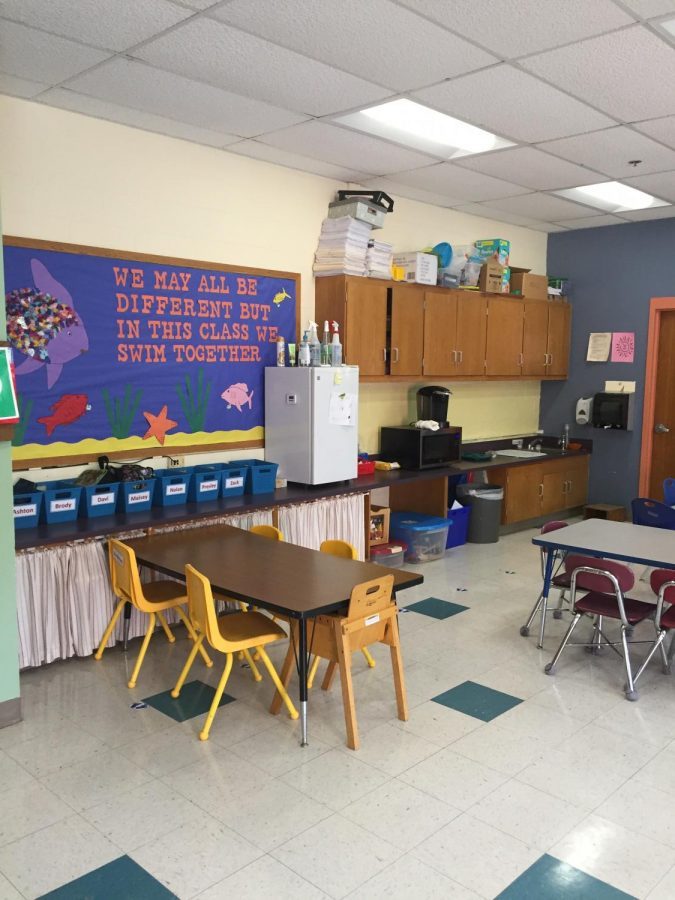 A Brief History of Julie Nichols

Ms. Julie Nichols initially wanted to become a Park Ranger for the National Parks, but later realized, “I liked working with children because I used to babysit a lot, which was fun, so I decided to go into teaching.”

This past week, the students of the journalism classes have been going all around the district interviewing teachers, old and new. At Newbury Elementary School, Nichols answered a few questions that reporters had for her. Such as, where she went to college, what made her want to become a teacher, and why she chose Triton.

Nichols first got a degree in teaching children environmental science, so she was teaching preschool at a zoo, and also at a farm in Ipswich, where she taught for two years. After that, she became a teacher’s assistant for an elementary school while her kids attended Triton High School. Then, she taught regular preschool for five years. Later on, she became an Instructional Assistant at Newbury Elementary School for three years, she went to Pine Grove for five years, and now she’s back at Newbury Elementary School.

“My first day back at NES felt like I never left seven years ago…. It’s a nice place, a comfortable place. All of the kids are friendly. When you walk by them they always say hi, same goes for the teachers. Everyone is just super friendly.”

She chose Triton for all kinds of different reasons. She said the main reason was because both of her children went to school in the district, starting at Pine Grove and moving up through the high school. She was very familiar with it, so it was a comfortable place for her to be. She said she knew a lot of the teachers and lived in Rowley, so it was never as if she had to commute to her job. It was always right down the street.

Nichols went on to explain that she is capable of working with any age group. “I like different ages, but for all different reasons.” With the younger kids, she enjoys how they’re curious and excited to learn. As for the older kids, they’re more independant, still curious, and just more willing to learn, rather than excited about it. A plus side of working with the upper-elementary students is that she gets to go to the environmental camp.

Around Triton High School, there are a lot of IA’s that students and staff see every day in the halls. Mr. Jimmy Mical being one of them, says that being an IA is “pretty simple and straight forward, depending on the kid you’re working with, you have to modify tests and make sure the kid is staying organized.”

Mical says he likes the hours of the job and the benefits he gets, especially the fact that he is able to be here 160/180 days of the school year. “The kids definitely make or break the job. If you have a good kid, it will be a good year. If the kid is a little difficult, it makes the job harder.” Sophomore Ben Rennick says that he likes having an IA with him. “They help me do work I don’t understand how to do.” Math teacher Mr. Patrick Sheehan says his favorite IA is Mr. Fred McCaskill because he’s very active in helping in the classroom atmosphere. The IA’s are helpful because there are a lot of students with questions, so it’s nice to have an IA there to help those particular students. “They take notes for the kids and keep them organized and on task.”