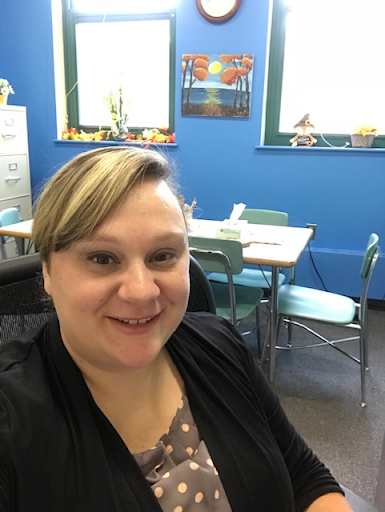 Walking past the window of the Newbury Elementary School guidance office, a student is in conversation with their counselor. When he leaves, he has a smile on his face. Allesha Kenyon is a guidance counselor in the district and  has worked with many different kids of all ages. She says there is a large difference between being a guidance teacher in an elementary school versus a high school.

Kenyon is today known as the guidance counselor for NES. She is well known in the district as she was also a guidance counselor in Triton High School for two years prior to being transferred to the elementary school. In an interview, she explained the contrasts of working with different age groups on an emotional level.

Kenyon spoke about the kind of work she does with the students in the school. Although many high school students end up meeting with guidance eventually, elementary schoolers visit just as often. High school is a time where students begin to think about college and their future. Many high schoolers enter guidance with a personal problem or a school problem, whereas an elementary schooler may be in trouble for teasing another student. Triton student Taylor Lattime has had previous experience in guidance and spoke about the benefits of guidance.

“Guidance has helped me a lot so far in high school. They really helped me sort through some problems, but more importantly, they helped me find a career path I was interested in,” she said.

Kenyon had worked with many instances like this where she was assisting students and helping them find something they’re passionate about.  In her two years as Admin Assistant, she helped the guidance office in any other ways as well. From answering phone calls to helping kids find their classes, Kenyon was always helping students as much as possible.

“I helped students find their classes when they came in and weren’t sure where to go. I was in charge of doing the report cards and the big scholarship assembly at the end of the year. That was all part of my job,” Kenyon said.

Now in the elementary school she is working more with the younger students and the problems they may have with their classmates. This includes teaching kids to express their feelings, teaching them to how to interact with their peers, and teaching kids the qualities of a good student. When asked why she loves working in the district, Kenyon spoke about how much she adores the relaxed feeling of the coastal region. She also stated that she loved to work with the kids in the district and was very grateful for the amazing support she has received in the community.

Now that Kenyon is working in the elementary school, who is doing her old job? Erik Champy is the “new” guidance counselor in Triton High School. He had been working previously in the Triton District for 22 years before transferring to the Massachusetts Teachers Association (MTA) where he worked to support members of the MTA. He also oversaw a multi-million annual operating budget process as vice president of the Association.  In an interview, Champy spoke about his experiences so far in Triton this year and what he does as guidance counselor.

“At Triton Regional High School, I have many responsibilities.  Aside from teaching ten sections of guidance seminar, I serve as a counselor to a significant amount of our students.  Further, I work with many individuals to ensure that our students have the tools and access to be most successful.”

Being a guidance counselor can be a very difficult job at times and the entire Triton community is happy to have both Dr. Champy and Kenyon working with the students to help them find a better future. What’s next for the people in guidance? Dr. Champy stated that working with high schoolers is his favorite position and he is very happy with where he is. As for Allesha Kenyon, she is also very happy with the environment she’s in now and enjoys working with the all ages of kids and their families.