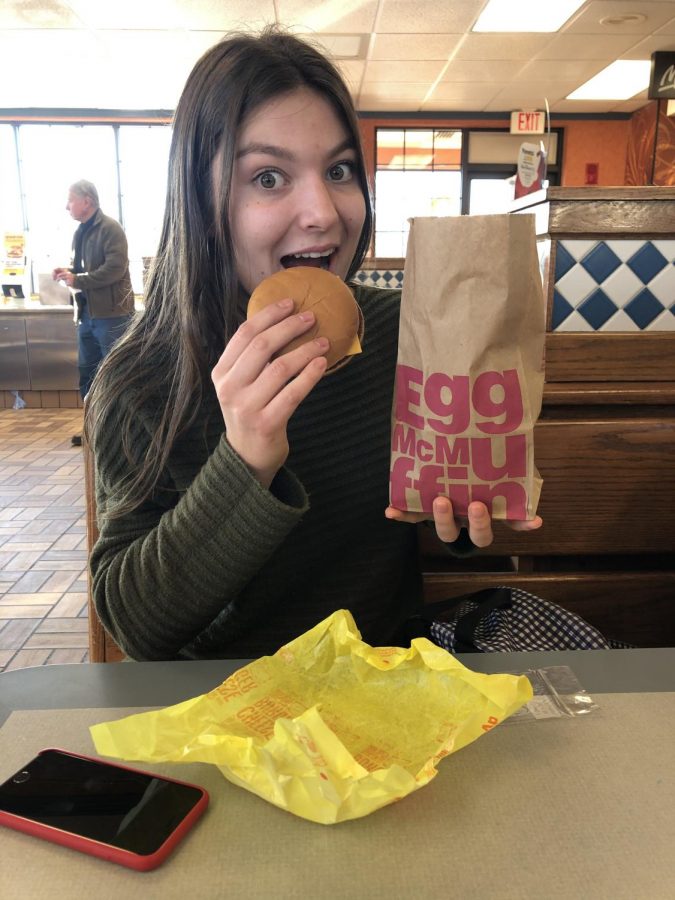 Which fast food giant will come out on top?

There’s one thing about fast food that everyone can agree on: it’s not healthy. Doctors, athletes, and frequent customers of fast food chains alike can all agree its full of unhealthy fats, calories, and feelings of guilt after being consumed. But, they can also agree that it tastes good. So can I.

I have my favorites and my personal opinions about what’s the best, as all Americans do, so to get a more unbiased view, I decided to bring someone in who didn’t have much of an opinion.

Ana Barona is a junior at Triton High School who is an exchange student from Spain spending the school year in the U.S. She has not eaten a lot of fast food in her time, with Spain not even having Wendy’s, so she was a perfect candidate to help me judge the food. She and I began our fast food journey together on the streets of Haverhill.

First stop, Wendy’s. Upon arrival, the atmosphere was lacking to say the least. There was an awkward seating arrangement, weird smells, and a very upset old woman at the counter. It’s fast food though, not a five star restaurant.

The crown jewels of Wendy’s are their regular and spicy nuggets, which taste the most “real” of the fake meat chicken nugget variety. The chicken was white on the inside and was covered with a crunchy, well seasoned, golden brown breading. The chicken was warm and tasted not that far off from chicken breast one would prepare at home. The spices that coated that breading radiated off into our noses, giving us an idea of the taste before it even enters your mouth. Barona said she “had never had chicken nuggets like these before”.

However, the blandness of the rest of the meal soon set in, with the fries tasting almost nothing but salt and the burger leaving much to be desired. The Wendy’s “Frosty”, essentially just soft serve ice cream, is just that, soft serve ice cream. The same thing you could find on an ice cream cone at the beach on a warm summer day pumped out of a machine into the swirl, minus the fun of the swirl, in a strange semi-liquid form. An enjoyable treat, but nothing special. Wendy’s really soars when it comes to how they price their items, the cost of what we got at Wendy’s being half the cost of what we got at McDonald’s. Our total for a cheeseburger, chicken nuggets, fries, and a frosty from Wendys was a little over four dollars, while the same thing cost around 10 dollars at McDonald’s.

McDonald’s was our second stop. The interior was very plastic, but organized in a more open design that made the idea of sitting down more inviting. We ordered our food on these large tablet computers, and our food was brought to us by a server. The modern lay out that many fast food places attempt at nowadays was executed with much more precision at McDonald’s than Wendy’s. In recent years, many fast places have been redesigned with an intention for a more modern and formal look. McDonald’s fake fireplace and interesting circular seating arrangements succeeded at making the fast food experience feel more formal.

The food was also much more consistent at McDonald’s, nothing incredible, but thoroughly enjoyable. The star of the show was their cheeseburger, which was leagues above the cheeseburger from Wendy’s. Ana and I agreed that the burgers more varying taste and tender meat made it was far more interesting in the flavor department.

However, Wendy’s still beat McDonald’s at the chicken nugget game by a long shot. Also, the milkshake from McDonald’s was surprisingly delectable, an excellent milkshake by any standard, not just the fast food standard. The chocolate flavor was unique, likely due to McDonald’s mixing their chocolate and vanilla flavors together to make the chocolate flavor, and the difference is noticeable compared to their competitors. The chocolate and vanilla blend together to create a rich, creamy flavor, a flavor that is lacking in the bland store-bought chocolate ice cream flavor of its competitor milkshake from Burger King.

Lastly, we headed towards Burger King. Now, maybe this is just me, but Burger King has always seemed to be a step below McDonald’s and Wendy’s in terms of popularity and quality compared to its competitors. Perhaps it’s poor marketing, or poor quality, but there’s no denying when looking at the number of sales that Burger King is not really on the same level of McDonald’s or Wendys, in the states at least. The average McDonald’s makes an average of 2.6 million a year, while the average Burger King makes less than half than that at 1.2 million per year. According to Barona, Burger King is very popular in Spain, more popular among the people she knows than McDonald’ss actually.

But, there’s just something missing about Burger King, and I was reminded of that mysterious it factor that Burger King lacks as soon as I walked in. The layout was fine but seemed to be nearly identical, though less sophisticated, to the McDonalds we had just been to.

We ordered our food with little trouble, though it did take about five minutes longer than the other two destinations, which is quite a long time in the world of fast food. Then the feast began.

However, Ana and I soon regretted signing up for this said feast. The basic items; burgers,fries, chicken nuggets and milkshakes, were all lacking.

The burger was pretty much on par with Wendys, if not a little bit better, but only a little bit. The chicken nuggets were nauseating, lumps of white meat that smelled of chemicals. The fries were too thick and tasted like paper, also like nothing but a somewhat a worse version of nothing. The milkshake was just some pretty standard blended ice cream, low quality, but tasted mediocre overall. Although, it still had nothing on the McDonalds milkshake.

As we left that day, with insanely high cholesterol and sodium levels, and more calories than our bodies knew what to do with, we both agreed on one thing. McDonald’s is king of the fast food wars.

However, McDonald’s prices hold it back from having a nearly perfect review. It is far too expensive for what it’s intended to be. Fast food is intended to be cheap, unhealthy, to taste good and well, fast. McDonald’s only exceeds in three of those categories.