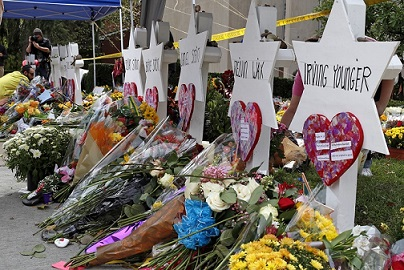 Flowers surround Stars of David as part of a makeshift memorial outside the Tree of Life Synagogue to the 11 people killed during worship services Saturday Oct. 27, 2018 in Pittsburgh.

Antisemitism is still around us, even if many of us fail to recognize it when we see it.

According to the Anti Defamation League (ADL), “Antisemitism is the belief or hostile behavior towards the Jews because they are Jewish.”  For example, drawing a swastika on public property, verbally or physically attacking someone for their race or religion, and telling Jews they only care about money are some things an antisemite might do. To this day antisemitism is still all around us, even in Triton Regional High School where in the past there have been occasional swastikas drawn on the bathroom walls. The people who drew them may not have even known it was hurtful.

Mr. Scott Brennan, the Vice Principal of Triton High School, has had some experiences with antisemitism.

“Me and my wife watched a movie the other day about a guy working in the newspaper, but what he did was–he wasn’t Jewish–but he became Jewish for a month. And his best friend was Jewish. It was World War II, it was happening in the United States, and it was unbelievable once people found out he was Jewish, and they started treating him differently. Basically the movie taught you is, hey if you listen to the jokes and just sit back, you are antisemetic too.  People are ignorant, they don’t know,” said Brennan.

Some other schools have had similar experiences.

Hayley Katz, a student from Andover High School, a community with more Jewish people, has had some similar experiences.

“In the past at my school, unfortunately, someone drew swastikas on a desk in a Jewish teachers classroom. Whenever I hear stories like this, I get really scared for myself and my other Jewish friends and family.”

Fear is a common reaction to most people who don’t know how to deal with antisemitism in a safe and healthy way.  Brennan is trying to teach kids to deal with,

“Sometimes you need to get kids together. I like to get  the person in the rooms with kids who are Jewish, because we have to teach empathy.”

According to Izzy Kalman of the ADL –  A better way to combat Anti-semetic bullying, “By employing reframing, a well-established psychological tool, rather than thinking of anyone who makes an anti-Semitic remark as genocidal Nazi enemies, we can treat them like misguided friends.”

While we may not see many problems of antisemitism here in the Triton Regional district, in larger Jewish populations the issue is more prevalent.

Mr. Patrick Kelley, the principle of Triton High School, used to teach and coach in Sharon MA, where there is a larger Jewish population.

“Coaching in Sharon we did have times where anti-Semitic comments were made to some of my players and even a time where pennies were thrown on a field.  These were terrible incidents that required a good deal of processing with my team and also the support of my school’s administration and the other school’s administrations to ensure similar events did not occur again.  My Jewish student-athletes in Sharon however, did have a strong sense of school and community support because the majority of students in the school while I was there were Jewish.”

“We want to make sure that our school is a safe and supportive environment for all students.  This means that we must respond anytime there is prejudice and discrimination within our school community.” Said Kelley.