This year’s NBA playoffs are in full swing, and it’s finally time to talk about the playoff picture 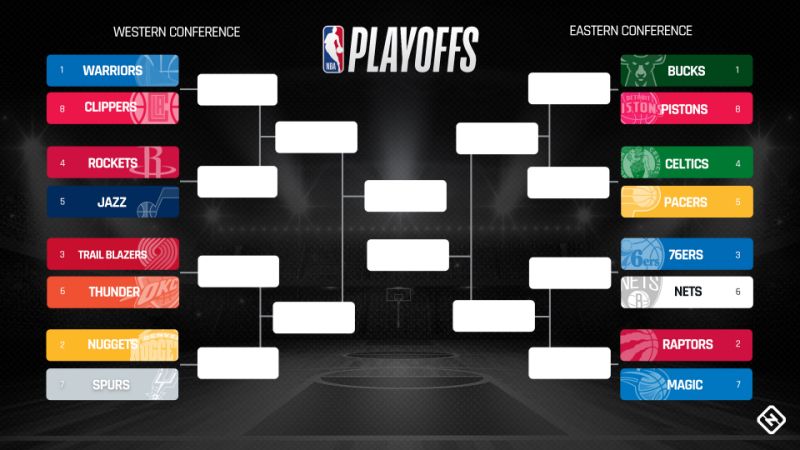 The regular season of the NBA recently reached an end, and so far, this years playoffs have proven to be one for the record books.

After a long 82 game season, the much anticipated playoffs are well underway. Starting Saturday, April 13th, the top eight teams from the two conferences began competing for the Championship Title.

From the East, in order from best to worst, the Bucks, Raptors, 76ers, Celtics, Pacers, Nets, Magic, and the Pistons made the playoffs. In the West, in similar order, the Warriors, Nuggets, Trailblazers, Rockets, Jazz, Thunder, Spurs, and the Clippers made the playoffs.

Overall, according to cbssports.com, the Warriors, Bucks, and Rockets have the best odds to winning the Championship.

“Looking for their third straight title, the Golden State Warriors open the 2019 NBA Playoffs as the Vegas favorites at 1-2 to win it all,” says cbssports. “The Milwaukee Bucks, who had the best record in the NBA, own the second best 2019 NBA playoff odds at 6-1, while the Houston Rockets own the third best playoff odds at 8-1.”

In the West, it doesn’t come as a surprise that the Warriors have the best odds, seeing as they won the 2017 and 2018 NBA finals and are looking to complete the threepeat. However, that’s not to say their path to the finals is guaranteed, as they are displayed struggles against the Clippers in the first round. Even when they move on to the next round, they will have to compete against the Houston Rockets, who have proven time and time again that they can compete with the best. Last year’s playoffs featured a Warriors vs. Rockets series that went to game seven, and all those seven games were competitive from start to finish.

Also, the Portland Trail Blazers are an underdog team that might just live up to their potential and upset the entire Western Conference. Going into the first round, the Blazers were projected to be swept by the OKC Thunder. However, they completely dominated that series, winning in a staggering five games. In this series, Damian Lillard made an argument for the title of “Best Point Guard in the League” after balling up on Russell Westbrook for 5 straight games. Particularly after the series winning shot, hit by Damian Lillard of the Trailblazers, it’s hard to argue that Portland is not a title contender.

“Damian Lillard’s shot against the Oklahoma City Thunder may be the greatest shot I’ve ever seen. It was absolutely sensational; Dame put on a show,” stated professional Sports Analyst Stephen A. Smith. “It’s time to put some respect on Damian’s name and recognize the Blazers as a legitimate team to win it all.”

In the East, the underdogs had a hard time beating the top rated teams. The Pacers were swept, along with the Pistons, by the Celtics and Bucks. The Nets and Magic both managed to squeeze out one win before getting eliminated. Needless to say, the top four teams in the East are dominating, which should lead to an exciting second round where they’ll compete head to head.

With the playoff picture finalized and the first round ending, Triton Staff Writers interviewed multiple students to get their opinions on who’s going all the way. “The finals matchup is going to be, sadly, the Golden State Warriors, against none other than our own Boston Celtics,” said Triton junior Andrew Valianti. “Celts in 7, and Kyrie will win finals MVP averaging 25 and 10.”

Hopes are high in Boston; Celtics fans are excited and eager to see their favorite players destroy expectations and win the Eastern Conference. It’s safe to say that all, if not most,  Boston sport fanatics are all dying to see if the Celtics, along with the Bruins, can win it all this year, completing the first “banner year” of all time.

A banner year, simply put, is when all four of a cities professional sports teams win a championship in the same year. The name is derived from the fact that all four teams would be raising a banner in their home stadium at the start of the next season. Not once, in all of sports history, has a city experienced a banner year. Now, during the 2018-2019 sports season, Boston has a serious shot at completing such a feat. After the Red Sox and Patriots both won it all for their sport, it falls to the hands of the Celtics and Bruins to allow their fans to witness history.

“If they’re able to do it [banner year], it would be the most amazing thing in modern professional sports history because no one’s ever done it, and no one will likely do it ever again,” stated Triton history teacher Chad Richards. “There would definitely be some tears, I may even lose my voice like I did when the Patriots played Kansas City. I will also remind my children and my students to enjoy it because I don’t know if it’ll ever happen again.”

Every team in the league has high ambitions to win it all this year. Whether it’s competing for a three-peat or a banner year, each franchise has something on the line. Only time will tell who will win it all and emerge the victors.