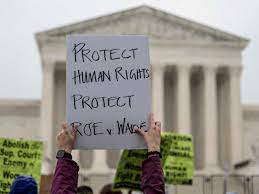 The Roe v. Wade leaked supreme court opinion that would possibly overturn the case is a very relevant topic in a lot of conversations in and out of school.

“I don’t think men should be making laws about women’s bodies,” said Junior, Taylor Morris “They don’t have any of the same reproductive organs.”

The leaked opinion is threatening the rights that women have on their bodies and many people are appalled and have a huge issue with it. Between the conversations about the case going on in and out of school, there is also a large amount of discussion about it on several social media platforms.

When the news first came out, Triton English teacher Margret Flaherty had thought about all the people that would die.

“We know from the past that abortion is going to happen regardless,” said Flaherty “And having legal access is having safer access. America was basically saying that it was okay if some of us died.” Put yourself in someone else’s shoes for a moment, you are a woman with a medical condition and this medical condition makes carrying a child to term extremely risky for you and could very likely lead to death but because the Roe v. Wade law just got overturned you could lose your life because you can’t get an abortion. In instances like these, we need to recognize that taking these rights away would impact many lives, not just the woman that would die but all of her family, friends or people that she would interact with.

“The other thing is The Supreme Court is doing this,” said Flaherty “And two people on The Supreme Court are credibly accused sexual abusers of women and so much privilege is involved with their entire rise to where they are right now. So they have proven themselves untrustworthy when it comes to women’s bodies and yet they are making decisions about women, about their bodies.”

There is also the economic issue that would happen if the case is overturned. “I think people don’t recognize the impact this would have on women’s economic status,” states Flaherty, “When Roe was passed, women entered the labor force in a huge wave because now they could decide when they want to have children… you are also impacting our overall economy, we saw with covid that half the workforce disappeared and we broke down.”

Lisa Herzl, a history teacher at Triton, has a class that talks specifically about the American legal system and helped to answer some of the questions about the legality of the case being overturned.

“Our legal system operates on president, which is based on what has happened before, so our president in our legal system is generally that when we gain rights and protections that they tend to stay in place,” said Herzel “If you are approaching Roe v. Wade as a privacy issue, and you’re going to revoke it based on privacy related stuff that could make other laws or rights people have based on privacy come under question. There is also now the speculation ’Is this going to impact gay marriage?’ ‘Is this going to impact interracial marriage?’.”

So because all of this is technically just speculation right now we don’t know anything for sure but these are the kind of things that we have to watch out for. Herzl can’t really say where this will lead but is very interested to see which way things will go when this will happen in July.