Everything From Speech to Dress Codes Was Changed Forever 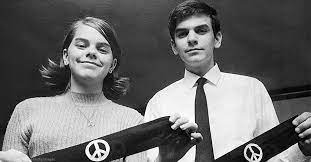 A former Triton student recently recounted  the time she was “suspended in middle school because I refused to stop wearing my hat.” You might think these ridiculous punishments would be in the wrong, and in many people’s view, you  would be correct with that assertion, according to a landmark Supreme Court case.

In 1969, the Tinker family won their case in the Supreme Court 7-2 that cemented the first amendment in schools and classrooms. According to the ACLU, who were instrumental during the 1969 case, “Tinker v. Des Moines Independent Community School District remains a frequently cited Supreme Court precedent. Thanks to the ruling, over the years the ACLU has successfully defended the right of students to wear an anti-abortion armband, a pro-LGBT T-shirt, and shirts critical of political figures.”

Thanks to Tinker v. Des Moines, students have the right to protest at their school. Whether they’re protesting legislation at a local or national level, schools are legally not allowed to stop them. According to MTSU, Justice Abe Fortas was writing for the majority of the Supreme Court when he stated that it “can hardly be argued that either students or teachers shed their constitutional rights to freedom of speech or expression at the schoolhouse gate.”

When it comes to the Dress Code, Tinker v. Des Moines has been influential in debates about the school rule. In virtually every case involving Dress Code violations, this case has been cited, such as in Palmer v. Waxahachie. Palmer had sued his school district for not allowing a t-shirt with the text “San Diego” written on it.. According to SeattlePI, “Tinker v. Des Moines was the first major case to challenge school Dress Codes, and has left ripples in the debate ever since.”

One could argue that there are more influential cases in regards to student rights such as Hazelwood v. Kuhlmeier. This case  was about free press rights in regards to school newspapers, and it has helped the First Amendment solidify itself in public schools. There is also the argument that “disrupting the classroom” is too vague, and can be exploited by those in power within school districts.

While the Hazelwood v. Kuhlmeier case is important to student expression within schools, it pales in comparison to Tinker v. Des Moines. Hazelwood v. Kuhlmeier was about the school principal removing articles from the school paper, but the case could have never happened without Tinker v. Des Moines. Without the latter case, the students would have never gotten to express themselves in the paper to begin with.

The complaint that the phrase “disrupting the classroom” is too vague is warranted, but it is not as big a deal as one may think. If an article of clothing is actively disrupting the classroom, people will realize and agree. If someone in power exploits the vague phrasing, the student can take up action against the school board, which no staff member wants to deal with.