Red Notice is Bad for Hollywood 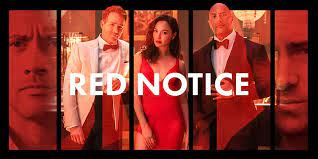 Red Notice should work on paper. It’s got a great cast set in beautiful places and its characters go on a treasure hunt.  The adventure feels like Idiana Jones.  So why isn’t it an immediate hit?

This movie starts off as a fun heist movie with a comedic side coming mainly from Ryan Reynolds. Most of the movie is enjoyable and humorous. But the ending is what completely ruined the film for me. This movie was hyped up with the trailer blowing up on social media. This movie was extremely cliche with plot twists we expected. The CGI effects were  terribly done and just made this movie seem cheap.

In the film, Nolan Booth (Ryan Reynolds) is an art thief who is attempting to steal all 3 of Cleopatra’s golden eggs to sell for 300 million dollars. However his competitor, The Bishop (Gal Gadot) is always one step ahead of him. Things get worse when FBI agent, John Hartley (Dwayne Johnson) is onto him but both he and Booth end up in jail.

Whilst in jail, they become closer and open up about their terrible fathers and how they ended up where they are today. This is a bonding moment between both characters but the dialog and cheesy jokes ruin it. After the two escape prison they truly become a “team”. When they go to steal the 2nd egg, the Bishop has already beat them again. Here we see how powerful she is and her ability to mislead and manipulate people. After Hartley and Booth escape from the Bishop and go to steal the 3rd egg, is when the two really bond and it’s nice to watch.  You can see both the characters and the actors have a human moment. The bishop eventually finds them but all 3 of them work together to escape from the cops.  After they escape and have all 3 eggs between them, this is when the film really takes a turn for the worse. After Nolan has the 3rd egg, he is overjoyed because he has a friend who  he is willing to sacrifice a lot of money for and he gets to see his nemesis fail. However, he finds out that the Bishop and Hartley are actually working together against him. This is where the plot takes a turn for the worse. When Nolan finally decides to trust someone and risk the 3rd egg to save someone else’s life, it becomes all for nothing.  John ends up to be working for the bishop against Nolan.  The whole ending ruins the theme of the movie and destroys any message the director wants to send.

Red Notice  takes inspiration from Raiders of the Lost Ark and National Treasure.  The movie doesn’t feel like a normal movie.  It has attempts to feel like Jungle Cruise and Jumanji.  The actors feel wooden and robotic.  Thurber seems to give the main actors as much screen time as possible and let them carry the story.

The cast was great, although Ryan Reynolds hasn’t had a serious role so they just use him for cheap jokes and makes their talent not worth this film. With a terrible ending, no character growth and a pointless story line. There were so many bad scenes that just made me confused.  The movie isn’t worth the 2 hours.  I would give it a 2.5 out of 5 starts.